In a break from my usual ramblings about CGI, I bought a new toy for my camera the other week and figured I'd write about it because a) it's pretty neat and b) it does tie in with my CGI work in a way as I use this camera for all of the live action in my composite testing & experiments.

The new toy I mentioned is a "Lens Turbo" from Zhongyi, not one of the best known manufacturers of camera optics in the world but hey, they had a neat idea and got to market with a competitive product that caught my eye. 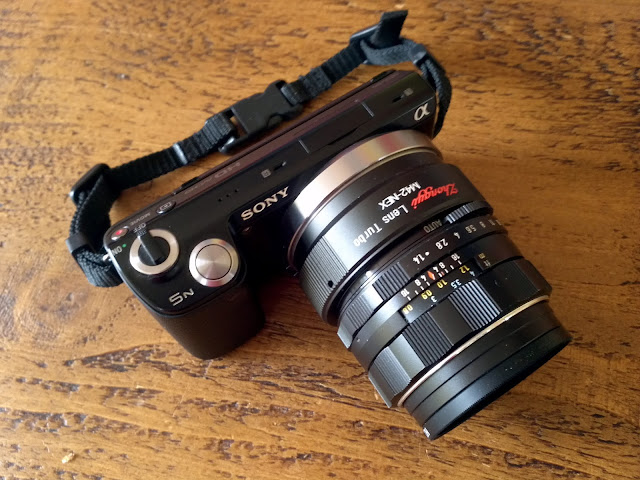 The Lens Turbo is an adapter that converts the e-mount fitting on my NEX 5N to M42 thread mount which means that I can attach old, well built, manual m42 lenses to my camera body and reap the benefits of using quality glass at a fraction of the cost.

Now, I've been using various adapters for my 5N since I got the body but the difference with the Lens Turbo is that it is not a simple tube like my other "dumb" adapters but has it's own optics which lessens the crop factor of the sensor in the camera.

OK, so I should probably explain crop factor now.......

Most lenses are built with 35mm film in mind, this means that the light is focussed down to the approximate area of a frame of 35mm film or a full frame sensor in a digital camera (36 x 24mm). So if you're using the lens on a camera with a smaller than full frame sensor it will result in the image being cropped because only the light that hits the sensor is processed. 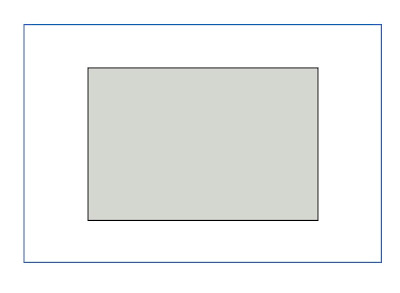 The white area represents the light that is cast by any lens and the grey area represents the light which is processed by my crop sensor for that lens. It's easy to deduce from the image that the field of view has been drastically reduced and that, while it would be possible to get the same field of view by taking a picture from a position further back, the depth of field in the shot would be affected as the lens would need to be refocussed.

The Lens Turbo refocusses the light from any attached lens onto the area of the APS-C sensor in my camera reducing the crop factor to a negligible amount. In some tests in which I compared a 50mm lens on one of the full frame Canon 5D mkIII's at work against my 50mm Super Takumar with the Lens Turbo the crop factor was reduced to approximately 1.08 which is a significant step up from the original 1.5.

The two images in this GIF were shot in my local park from the same spot on a tripod, and using the same 50mm lens. One with the dumb adapter and the other with the Lens Turbo, I scaled the dumb adapter image down to better illustrate the crop.......

The images were shot in wide screen format as I usually use my camera for video work and forgot to change the settings but as this is simply a demonstration of the adjusted field of view that the Lens Turbo offers, and not an entry in a photography competition I figured it would be ok in this case.

Another benefit of the Lens Turbo is that because more light is focussed onto the sensor the aperture is effectively reduced by nearly a whole stop so my 1:1.4 50mm Super Takumar is opened up to about 1:0.4 which means that I can use faster film speeds in lower light and reduce noise on the image.

So far, I've been really impressed by the Lens Turbo. I think that a professional photographer or film maker would be less happy with images that have been taken using one of these adapters but as I am neither I am more than happy with the results and it would cost much more than the price of my camera body and the Lens Turbo to buy even an old full frame sensor body.
Posted by Mat Clark at 12:28 No comments:

So, it's been a while since my last posting..... school holidays, kids to entertain, general chill out and a multitude other things have meant that personal projects have been put on hold for the past few weeks.

That said, stuff has been going on....

It's difficult to not to notice that my last few posts have centred on lattice creation.... I have since created my ultimate lattice tool.... well ultimate for now and until inspiration breeds something new. Anyway, it's great and I'll get it onto Creative Crash, make a demo video and write a post all about that later.

I've also got shiny new camera stuff in the shape of a focal reducer... a focal what??... you heard me, a focal reducer... I'll let you into what that does in another post that I have planned for the very near future but the aim of this particular post is not to focus on focal reducers.

I got some great news the other day about my Shadow & Light animation, it got selected for SIGGRAPH Asia this year and will be presented as part of their Computer Animation Festival in Hong Kong.

I've been blown away by the popularity and success of this little animation, and I might also add a little perplexed!

Yes there is 3 months worth of research and development that went into my being able to make the film but the final product was initially made very quickly for a local event and I figured that would be the end of it, but it has since been shown at Animex, SIGGRAPH and now SIGGRAPH Asia so how did that happen....?

I guess a lot of it has to do with the fact that I submitted my work in the first place, I was brought up with the saying "shy bairns get nowt" instilled in my conscience and it has worked in my favour in this case but why this particular animation? What is it about Shadow & Light that people like?

I really have no idea.... perhaps it's a zeitgeist thing, I may have inadvertently created something that aligns with what people want to look at or can empathise with at this current time... I normally deal with narrative and don't really understand art so when I make an "art" piece that becomes popular, of course I'd like to be able to do it again but, as I don't truly understand what I've done....... well, you get where I'm coming from.

Whatever the reasons I'm well chuffed that it's getting presented on these international stages and is being shown in amongst some truly amazing and inspiring work.
Posted by Mat Clark at 18:46 No comments: