In my previous post I started to develop my understanding of a few different systems in Maya, n-cloth, n-hair and paint effects, and I enjoyed it soooo much that I felt like running a few more tests but this time with more rope..... so I made a net.

There's twenty six ropes in the net and four tether ropes.... that's a whole load of constraints (173 to be precise) but it didn't take too long to set up and I think the effect is pretty neat... Yes I could have simply used a texture on an n-cloth plane to create a net but that's not the point of this exercise, I wanted to learn more about n-hair and this allowed me to do just that.

It's easy to see that some of the ropes don't quite reach the edge of the net, I believe that this has something to do with the stretch attribute of the hair curves... Regardless that the net is impossible I rather like the sketchy look of it but will look into fixing things in my next investigations.

The video doesn't really do justice to the amount of detail that there is in the net ropes, I left the look of them pretty loose, kind of like they were fashioned by hand from jungle vines or something similar. Here's a close up of the net that also shows the PFX mesh towards the right of the image..... 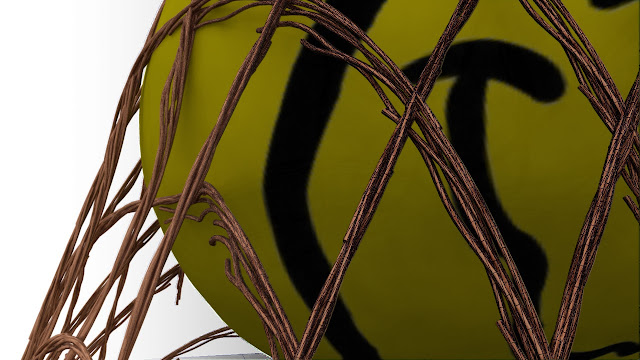 Of course, converting PFX to geometry can make for a pretty heavy scene polygon-wise, in this case the net adds up to approximately 349000 faces but it is necessary as it's the only way that Mentalray can render the paint effects strokes... It's not always necessary to render in MR but I wanted to use final gather for self shadowing in this case.

I'm really loving the unpredictability of cloth and hair simulation and I'm understanding more and more about how it is possible to control the systems and how to avoid some of the issues that can arise through using them. So it's likely that I'll be posting more investigations in the future!

I had an idea to create an inflating object so that's just what I did.... Being a dynamic simulation though it was never going to be as straight forward as I had hoped!

My initial idea was to have a tethered balloon inflate and then the tethers release and the balloon float off.... each part is simple enough but then there's the "C" word.... that's right, I'm talking about constraints. I discovered that n-cloth doesn't play too nicely with constraints on hair systems and the only work around appeared to be to set up the hair systems first which was a bit backwards really as the n-cloth was driving the hair.

Anyway, after a little jiggery pokery I got it to work in the end.....


For a first attempt I'm pretty pleased with it, there's issues with the tension on the guy ropes and the rope on the right isn't really behaving as it ought to at it's connection with the balloon but these are minor issues thatcan be ironed out as I continue to develop my understanding of the systems, the main thing is I have created a workflow that can produce results... happy days!

I was speaking with the father of one of my daughters friends about physics and molecular astronomy.... as you do when you're waiting in the playground for your kid to go into school.... actually he was talking about it and I was standing there feeling every ounce of the intelligence I thought I had slipping away as I tried to follow his train of thought.

Anyway.... It got me to thinking I should try to make some kind of molecular animation, it's not something I've really tried before and it could look cool. I know it's not really at a molecular level but I know what mitosis is and thought it would be a good idea to start with something I know.

This the product of my efforts.....

The animation turned out pretty well and it was an interesting investigation, I had a play with various ideas including blend shapes and soft bodies but n-cloth worked really nicely in the end. I only ran one cellular split and used After Effects to comp the shot together.
Posted by Mat Clark at 20:16 No comments:

The SIGGRAPH organisers have put a preview trailer For the Dailies presentations on the website and I'm chuffed to bits (slight understatement) to see that they've included my work in it.... That's right, my images are being used to advertise an event at the worlds foremost exhibition of computer graphics and interactive techniques...... crazy!

Having only read the call for submissions the day before the deadline, and thinking about it over the next day, I only decided a couple of hours before closing that I had nothing to lose by submitting my work and story for the consideration of the Dailies Jury.....


I really wasn't convinced that more than a cursory glance would have been made at my work considering the heavy hitters that have appeared in the previous presentations that I had looked at.... Pixar and Dreamworks I'm looking at you!!..... but it turns out that my doubts were unfounded because the wonderful thing about Dailies is that it's about the story behind the work as much as, if not more, than the finished piece itself and that everyone from industry to individual has a chance to be part of the presentations.

I wouldn't be showing my work on a world stage like SIGGRAPH if I hadn't just bitten the bullet and hit the enter key on my submission. I can only recommend that if anyone reading this has doubts over whether they should enter their own work for any exhibition, they should just do it.... there really is nothing to lose and something wonderful may come of it.

Further Adventures of the Particle People....

I've been playing with particles again, but this time in Maya rather than Realflow.

An ex-student of mine was having issues with particle goals and so, the charitable guy that I am, I helped him out and became interested in the potential for the effects that could be created using the workflow that I had developed for him.

This is a short clip that I made as an initial investigative test to loosely attach particles to a moving object......

I figured that it would be a bit more interesting to composite the effect to some live action rather than just show another proof of concept in the Maya workspace. It was was a very quick job that adds a bit more narrative to the effect and also allowed me to brush up on my tracking and compositing skills.

I'll certainly be developing my understanding of the particle systems in Maya and will post any interesting findings that I have when I have them.
Posted by Mat Clark at 10:16 No comments: